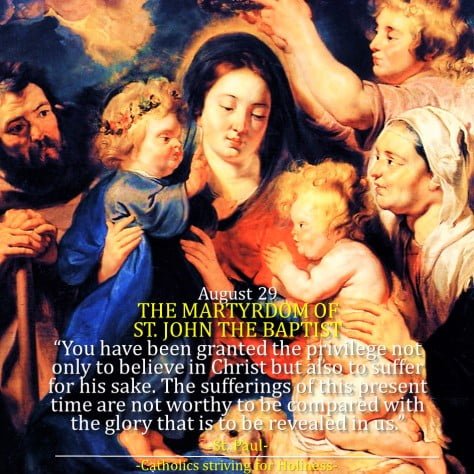 St. John’s fearless condemnation of Herod’s unlawful marriage incurred the hatred of the king’s bride, Herodias. She had him imprisoned and finally killed. St. John the Baptist teaches us to be strong in carrying out the mission God has given us.

Herod was the one who had John the Baptist arrested and bound in prison on account of Herodias, the wife of his brother Philip, whom he had married. John had said to Herod, “It is not lawful for you to have your brother’s wife.” Herodias harbored a grudge against him and wanted to kill him but was unable to do so. Herod feared John, knowing him to be a righteous and holy man, and kept him in custody. When he heard him speak he was very much perplexed, yet he liked to listen to him. She had an opportunity one day when Herod, on his birthday, gave a banquet for his courtiers, his military officers, and the leading men of Galilee. Herodias’ own daughter came in and performed a dance that delighted Herod and his guests. The king said to the girl, “Ask of me whatever you wish and I will grant it to you.” He even swore many things to her, “I will grant you whatever you ask of me, even to half of my kingdom.” She went out and said to her mother, “What shall I ask for?” She replied, “The head of John the Baptist.” The girl hurried back to the king’s presence and made her request, “I want you to give me at once on a platter the head of John the Baptist.” The king was deeply distressed, but because of his oaths and the guests he did not wish to break his word to her. So he promptly dispatched an executioner with orders to bring back his head. He went off and beheaded him in the prison. He brought in the head on a platter and gave it to the girl. The girl in turn gave it to her mother. When his disciples heard about it, they came and took his body and laid it in a tomb.

2. COMMENTARY TO THE GOSPEL OF ST. MARK, NAVARRE BIBLE.

3. Second Reading. From a homily by St. Bede the Venerable, priest. Precursor of Christ in birth and death

As forerunner of our Lord’s birth, preaching and death, the blessed John showed in his struggle a goodness worthy of the sight of heaven. In the words of Scripture: Though in the sight of men he suffered torments, his hope is full of immortality. We justly commemorate the day of his birth with a joyful celebration, a day which he himself made festive for us through his suffering and which he adorned with the crimson splendour of his own blood. We do rightly revere his memory with joyful hearts, for he stamped with the seal of martyrdom the testimony which he delivered on behalf of our Lord.

There is no doubt that blessed John suffered imprisonment and chains as a witness to our Redeemer, whose forerunner he was, and gave his life for him. His persecutor had demanded not that he should deny Christ, but only that he should keep silent about the truth. Nevertheless, he died for Christ. Does Christ not say: I am the truth? Therefore, because John shed his blood for the truth, he surely died for Christ.

Such was the quality and strength of the man who accepted the end of this present life by shedding his blood after the long imprisonment. He preached the freedom of heavenly peace, yet was thrown into irons by ungodly men; he was locked away in the darkness of prison, though he came bearing witness to the Light of life and deserved to be called a bright and shining lamp by that Light itself, which is Christ. John was baptized in his own blood, though he had been privileged to baptize the Redeemer of the world, to hear the voice of the Father above him, and to see the grace of the Holy Spirit descending upon him. But to endure temporal agonies for the sake of the truth was not a heavy burden for such men as John; rather it was easily borne and even desirable, for he knew eternal joy would be his reward.

Since death was ever near at hand through the inescapable necessity of nature, such men considered it a blessing to embrace it and thus gain the reward of eternal life by acknowledging Christ’s name. Hence the apostle Paul rightly says: You have been granted the privilege not only to believe in Christ but also to suffer for his sake. He tells us why it is Christ’s gift that his chosen ones should suffer for him: The sufferings of this present time are not worthy to be compared with the glory that is to be revealed in us.

℟. King Herod ordered John’s arrest and had him chained and put in prison.* Herod did this because of Herodias, whom he had married even though she was the wife of his brother Philip.

℣. The king sent off a guard and had John’s head cut off in prison.* Herod did this because of Herodias, whom he had married even though she was the wife of his brother Philip.

O God, who willed that Saint John the Baptist should go ahead of your Son both in birth and in death, grant that as he died a Martyr for truth and justice, we, too, may fight hard for the confession of what you teach. Through our Lord.Let us pray.