Born in the Castle of Xavier near Sanguesa, in Navarre, Spain, St. Francis Xavier (1506-1552) studied in Paris where he met Ignatius of Loyola and in 1534 joined him as one of his first followers, of the Society of Jesus, commonly known as the Jesuits. St. Francis Xavier had a great apostolic zeal, fruit of his profound interior love for Jesus, such that he wanted to make Him known to a lot of souls and bring them closer to Christ.

He sailed to the East Indies from Lisbon, landing at Goa. For the next 10 years he labored to bring the faith to such widely scattered peoples as the Hindus, the Malayans and the Japanese. From Japan he had dreams of going to China, but this plan was never realized. Before reaching the mainland he died. His remains are enshrined in the Church of Good Jesus in Goa. 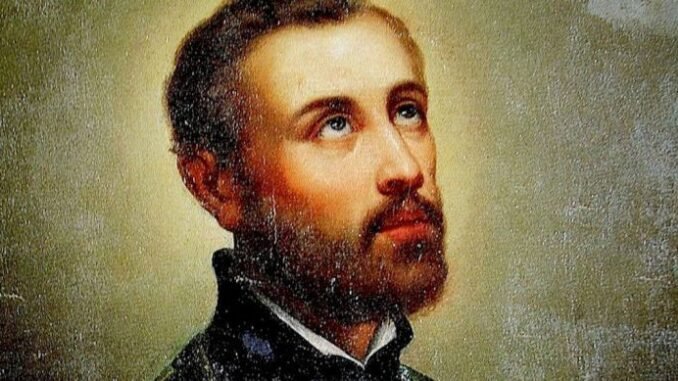 Dear friends, as Christians, all of us are called to holiness which is inseparable from apostolate. But let us be reminded with the words of St. Josemaria:

“You have got to be a ‘man of God’, a man of interior life, a man of prayer and sacrifice. Your apostolate must be the overflow of your life ‘within’ (The Way, n. 961).”

Through the intercession of Our Lady, Queen of Apostles and Help of Christians, that we may have a profound apostolic zeal, fruit of a superabundant interior life and love for Our Lord Jesus Christ.

Below is the 2nd reading of today’s Divine Office which shows us St. Francis Xavier’s total dedication and self-giving to make Christ known to all peoples: it is worth the read!

-Fr. Rolly Arjonillo, priest of Opus Dei, CATHOLICS STRIVING FOR HOLINESS. We are also in Facebook: www.facebook.com/CatholicsstrivingforHoliness. Hope you like our page and invite your friends as well to do so in order to help more people.

From the letters to Saint Ignatius by
Saint Francis Xavier, priest
Woe to me if I do not preach the Gospel

We have visited the villages of the new converts who accepted the Christian religion a few years ago. No Portuguese live here—the country is so utterly barren and poor. The native Christians have no priests. They know only that they are Christians. There is nobody to say Mass for them; nobody to teach them the Creed, the Our Father, the Hail Mary and the Commandments of God’s Law.

I have not stopped since the day I arrived. I conscientiously made the rounds of the villages. I bathed in the sacred waters all the children who had not yet been baptized. This means that I have purified a very large number of children so young that, as the saying goes, they could not tell their right hand from their left. The older children would not let me say my Office or eat or sleep until I taught them one prayer or another. Then I began to understand: “The kingdom of heaven belongs to such as these.”

I could not refuse so devout a request without failing in devotion myself. I taught them, first the confession of faith in the Father, the Son and the Holy Spirit, then the Apostles’ Creed, the Our Father and Hail Mary. I noticed among them persons of great intelligence. If only someone could educate them in the Christian way of life, I have no doubt that they would make excellent Christians.

Many, many people hereabouts are not becoming Christians for one reason only: there is nobody to make them Christians. Again and again I have thought of going round the universities of Europe, especially Paris, and everywhere crying out like a madman, riveting the attention of those with more learning than charity: “What a tragedy: how many souls are being shut out of heaven and falling into hell, thanks to you!”

I wish they would work as hard at this as they do at their books, and so settle their account with God for their learning and the talents entrusted to them.

This thought would certainly stir most of them to meditate on spiritual realities, to listen actively to what God is saying to them. They would forget their own desires, their human affairs, and give themselves over entirely to God’s will and his choice. They would cry out with all their heart: Lord, I am here! What do you want me to do? Send me anywhere you like—even to India.

O God, who through the preaching of Saint Francis Xavier won many peoples to yourself, grant that the hearts of the faithful may burn with the same zeal for the faith and that Holy Church may everywhere rejoice in an abundance of offspring. Through our Lord Jesus Christ, your Son, who lives and reigns with you in the unity of the Holy Spirit, one God, for ever and ever.

Share to help others in their Catholic faith and life.
Tags: Apostolic zeal St. Francis Xavier

POPE FRANCIS ON THE 3RD SUNDAY IN ORDINARY TIME YEAR A