CHRISTMAS NOVENA (Dec. 17-25)
Dec. 17: Gospel of the Day, Commentary and Prayer.
St. Leo the Great, The Genealogy of Jesus Christ.

Dear brethren in Christ, as preparation for Christmas, below you have the Gospel of the day, commentary by St. Leo the Great for meditation, and the corresponding Antiphon and Opening prayer of the Mass.
Please do us the kind favor of liking our Facebook page so we could reach and help more people.

Rejoice, O heavens, and exult, O earth, for our Lord will come to show mercy to his poor.

The Navarre Bible Commentary to the Gospel of St. Matthew explains:

“1 This verse is a kind of title to St Matthew’s entire Gospel. The promises God made to Abraham for the salvation of mankind (Gen 12:3) are fulfilled in Jesus Christ, as is Nathan’s prophecy to King David of an everlasting kingdom (2 Sam 7:12-16).

11 The deportation to Babylon, described in 2 Kings 24-25, fulfilled the prophets’ warning to the people of Israel and their kings that they would be punished for their infidelity to the commandments of the Law of God, especially the first commandment.

FOR THE DEC. 17 MASS PRAYERS AND READINGS, CLICK HERE

2. Divine office Reading on the Genealogy of Our Lord Jesus Christ from St. Leo the Great 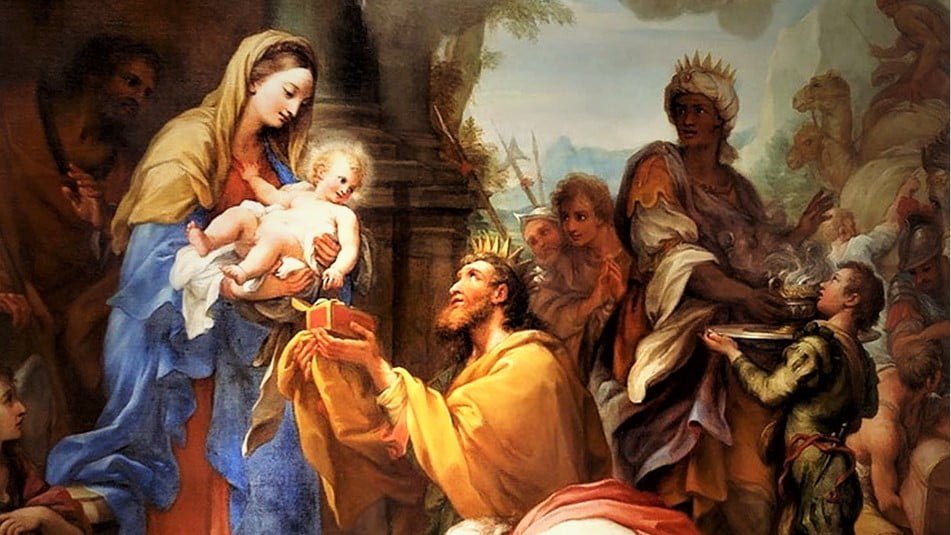 To speak of our Lord, the son of the Blessed Virgin Mary, as true and perfect man is of no value to us if we do not believe that he is descended from the line of ancestors set out in the Gospel.

Matthew’s gospel begins by setting out the genealogy of Jesus Christ, son of David, son of Abraham, and then traces his human descent by bringing his ancestral line down to his mother’s husband, Joseph. On the other hand, Luke traces his parentage backward step by step to the actual father of mankind, to show that both the first and the last Adam share the same nature.

No doubt the Son of God in his omnipotence could have taught and sanctified men by appearing to them in a semblance of human form as he did to the patriarchs and prophets, when for instance he engaged in a wrestling contest or entered into conversation with them, or when he accepted their hospitality and even ate the food they set before him. But these appearances were only types, signs that mysteriously foretold the coming of one who would take a true human nature from the stock of the patriarchs who had gone before him. No mere figure, then, fulfilled the mystery of our reconciliation with God, ordained from all eternity.

The Holy Spirit had not yet come upon the Virgin nor had the power of the MostHigh overshadowed her, so that within her spotless womb Wisdom might build itself a house and the Word become flesh. The divine nature and the nature of a servant were to be united in one person so that the Creator of time might be born in time, and he through whom all things were made might be brought forth in their midst.

For unless the new man, by being made in the likeness of sinful flesh, had taken on himself the nature of our first parents, unless he had stooped to be one in substance with his mother while sharing the Father’s substance and, being alone free from sin, united our nature to his, the whole human race would still be held captive under the dominion of Satan. The Conqueror’s victory would have profited us nothing if the battle had been fought outside our human condition. But through this wonderful blending the mystery of new birth shone upon us, so that through the same Spirit by whom Christ was conceived and brought forth we too might be born again in a spiritual birth; and in consequence the evangelist declares the faithful to have been born not of blood, nor of the desire of the flesh, nor of the will of man, but of God.

O God, Creator and Redeemer of human nature, who willed that your Word should take flesh in an ever-virgin womb, look with favor on our prayers, that your Only Begotten Son, having taken to himself our humanity, may be pleased to grant us a share in his divinity. Who lives and reigns with you in the unity of the Holy Spirit, one God, for ever and ever. Amen.

IN TODAY’S GOSPEL (MATTHEW 1:1-17), MATTHEW’ BOOK BEGINS WITH THE WORDS, “THE BOOK OF THE GENEALOGY OF JESUS CHRIST, THE SON OF DAVID, THE SON OF ABRAHAM.” Being the Messiah, Jesus will be the King in the line of David. And He is a descendant of Abraham whom God says, “and in your descendants all the nations of the earth will find blessing” (Genesis 22:18). Throughout the genealogy of Jesus, sinners abound.

Share to help others in their Catholic faith and life.
Tags: Advent prayer Christmas preparation Genealogy of Jesus Christ St. Leo the Great