2.1. The Revelation of the Trinity

2.2. It removes the scandal of the Cross: it forewarns and strengthens the faith and hope of the Apostles and His Church.

2.3. The indispensable importance of listening to Christ. 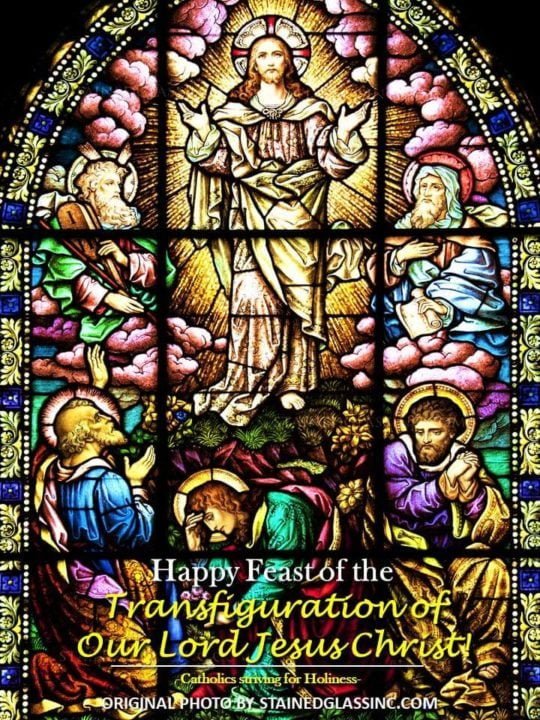 1. Summary of ideas of the today’s readings.

At the feast of the Transfiguration of the Lord, God the Father solemnly declares on the mountain before Peter, James and John that Christ is his Only Begotten Son, to whom they must listen and follow (Mt 17:1–9):

The apostles can contemplate with their own eyes the glory of the future resurrection manifested in Our Lord’s Transfiguration which they have witnessed (2nd reading, 2 Pt 1:16–19).

Christ is the one who has the power and the glory, he is the king of the universe, because he has received everything from the Father (Dn 7:9–10, 13–14).

2. Lessons from Our Lord’s Transfiguration.

2.1. The Revelation of the Trinity

The Transfiguration, in the first place, a manifestion and revelation of the Triune Nature of God, the Most Blessed Trinity and of Jesus Christ’ and our future glory of the Resurrection which comes by way of the Cross.

“the Father in the voice, the Son in the man Jesus, the Spirit in the shining cloud” (Saint Thomas Aquinas). Speaking with Moses and Elijah about his “departure” (Luke 9:31), Jesus reveals that his glory comes by way of the cross and he anticipates his resurrection and his glorious coming “which will change our lowly body to be like his glorious body” (Philippians 3:21). Compendium, n. 110.

2.2. It removes the scandal of the Cross: it forewarns and strengthens the faith and hope of the Apostles and His Church.

Not content with telling them in advance about his Death and Resurrection on the third day, Jesus also wanted that the two of the three future pillars of the Church (cf. Gal 2:9) see his Transfiguration and thereby glimpse the glory and majesty with which his holy human nature will be endowed in heaven. For what reason? As St. Leo the Great taught in his sermon:

“The great reason for this transfiguration was to remove the scandal of the cross from the hearts of his disciples, and to prevent the humiliation of his voluntary suffering from disturbing the faith of those who had witnessed the surpassing glory that lay concealed.

With no less forethought he was also providing a firm foundation for the hope of holy Church. The whole body of Christ was to understand the kind of transformation that it would receive as his gift: the members of that body were to look forward to a share in that glory which first blazed out in Christ their head. (St. Leo the Great, Sermon on the Transfiguration).”

2.3. The indispensable importance of listening to Christ.

God the Father gave us another important advice: to listen to His Beloved Son. In Our Lord Jesus Christ, God speaks to all men; and through the Church, his voice resounds in all ages. As St. John Paul clearly wrote:

“The Church does not cease to listen to his words. She rereads them continually. With the greatest devotion she reconstructs every detail of his life. These words are listened to also by non-Christians. The life of Christ speaks, also, to many who are not capable of repeating with Peter, ‘You are the Christ, the Son of the living God’ (Mt 16:16). He, the Son of the living God, speaks to people also as Man: it is his life that speaks, his humanity, his fidelity to the truth, his all-embracing love. Furthermore, his death on the Cross speaks — that is to say the inscrutable depth of his suffering and abandonment. The Church never ceases to relive his death on the Cross and his resurrection, which constitute the content of the Church’s daily life… The Church lives his mystery, draws unwearyingly from it and continually seeks ways of bringing this mystery of her Master and Lord to humanity — to the peoples, the nations, the succeeding generations, and every individual human being
(St. John Paul II, Redemptor hominis, 7).”

3. We will also be transfigured with Christ if we faithfully follow His footsteps and embrace His Cross in our life.

Dear brethren in Christ, as Christians, we are called to a holy life, faithfully following the footsteps of Christ, identifying ourselves with Him during our earthly life.

Christian life is not comfortable but it is worthwhile since our way is that of Christ’s and His life  necessarily includes His Passion and Death on the Cross to culminate in His Resurrection and Ascension into Heaven.

Such will also be the life of Christians who unite themselves with Him. Let us then, with Christ, not be afraid to embrace and love the Cross and all it entails –pain, suffering, sacrifice, difficulties…– so as with Him we will arrive at the transfigured glory of the Resurrection which He promised to us.

[Video is from Thai Insurance]

My young mind was fertile with imagination – and that aspect of my youth continues to this day – I dreamt of these superheroes flying in the sky, saving the earth from the villains of the universe and restoring order and good.