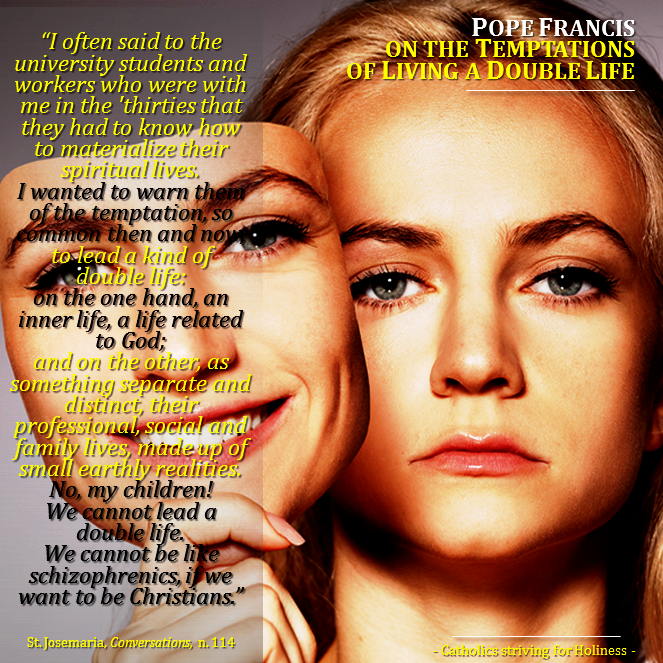 POPE FRANCIS ON THE TEMPTATIONS OF LIVING A DOUBLE LIFE

In his Nov. 17, 2015 homily at Santa Marta, Pope Francis employed the 90-year old Eleazar’s heroic example in fulfilling God’s Law as point of departure to stress THE IMPORTANCE OF LIVING A LIFE COHERENT TO OUR CHRISTIAN FAITH and encouraged us TO REJECT THE TEMPTATION TO LIVE A DOUBLE LIFE, as camouflaged Christians in the middle of the world.

While I was reading his homily, St. Josemaria’s words regarding the importance for Christians to live the UNITY OF LIFE in the middle of the world came to my mind and which I would like to share to you for your own personal meditation. Here it goes:

“I often said to the university students and workers who were with me in the thirties that THEY HAD TO KNOW HOW TO MATERIALIZE THEIR SPIRITUAL LIVES. I wanted TO WARN THEM OF THE TEMPTATION, SO COMMON THEN AND NOW, TO LEAD A KIND OF DOUBLE LIFE: on the one hand, an inner life, a life related to God; and on the other, as something separate and distinct, their professional, social and family lives, made up of small earthly realities.

No, my children! WE CANNOT LEAD A DOUBLE LIFE. WE CANNOT BE LIKE SCHIZOPHRENICS IF WE WANT TO BE CHRISTIANS. There is only one life, made of flesh and spirit. AND IT IS THAT LIFE WHICH HAS TO BECOME, IN BOTH BODY AND SOUL, HOLY AND FILLED WITH GOD: WE DISCOVER THE INVISIBLE GOD IN THE MOST VISIBLE AND MATERIAL THINGS.

THERE IS NO OTHER WAY, MY DAUGHTERS AND SONS: EITHER WE LEARN TO FIND OUR LORD IN ORDINARY, EVERYDAY LIFE, OR WE SHALL NEVER FIND HIM. That is why I tell you that our age needs to give back to matter and to the apparently trivial events of life their noble, original meaning. It needs to place them at the service of the Kingdom of God; it needs to spiritualize them, turning them into a means and an occasion for a continuous meeting with Jesus Christ.”

Dear friends, let us strive daily to reject the temptation of living a double life as Christians: Christians who only behave as such an hour a week during the Sunday Mass and who become a completely different person during the rest of the week, living a life inconsistent, or worse still, incompatible with the Christian ideals.

WE MUST KEEP ON STRIVING, OUT OF LOVE FOR GOD, TO BE  CHRISTIANS 24/7, determined to make our personal relationship with God illumine, influence and permeate all our daily ordinary activities, thus, converting them into a means and occasion to glorify God and gain souls for Him.

-Fr. Rolly Arjonillo, priest of Opus Dei, CATHOLICS STRIVING FOR HOLINESS. We are also in Facebook: www.facebook.com/CatholicsstrivingforHoliness. Hope you like our page and invite your friends as well to do so in order to help more people.

If you have friends who do not have a Facebook account but you think would benefit from our posts, they can receive our posts by email once they follow us and subscribe in www.catholicsstrivingforholiness.com

(Vatican Radio) The importance of safeguarding our Christian identity and not living double lives: that was the theme at the heart of Pope Francis’ homily at the Santa Marta Mass on Tuesday morning. The Pope based his words on the daily readings which focus on the NEED FOR COHERENCE BETWEEN OUR SPIRITUAL AND OUR TEMPORAL LIVES.

Pope Francis began by reflecting on the elderly Jewish Rabbi Eleazar who chose to be martyred rather than submit to the unjust laws that we read about in the second book of Maccabees. The 90 year-old Eleazar refused to eat pork meat and rejected the offer of his “worldly” friends to compromise his integrity, choosing instead to die a martyr’s death.

SPIRITUAL WORLDLINESS, Pope Francis said, TEMPTS US TOWARDS AN INCONSISTENT LIFESTYLE, IN WHICH WE PRETEND TO BE ONE THING BUT LIVE IN ANOTHER WAY. It may be difficult to recognize, he said, but just as woodworm slowly destroys things, so WORLDLINESS SLOWLY LEADS US TO LOSE OUR CHRISTIAN IDENTITY.

WORLDLINESS, HE WENT ON, LEADS TO INCONSISTENCY BETWEEN THE THINGS WE SAY – “Oh, I’m a good Catholic, Father, I go to Mass every Sunday” – AND THE THINGS WE DO AT WORK, SUCH AS OFFERING OR RECEIVING BRIBES FOR EXAMPLE. This is not being consistent, the Pope said, rather it leads to a double life which distances us from God and destroys our Christian identity.

For this reason, Pope Francis continued, Jesus strongly pleads with his Father to save his disciples from such a worldly spirit. THE CHRISTIAN SPIRIT, ON THE OTHER HAND, THE CHRISTIAN IDENTITY, HE SAID, IS NEVER EGOISTIC, BUT ALWAYS TRIES TO BE CONSISTENT, AVOIDING SCANDAL, HELPING OTHERS AND SHOWING A GOOD EXAMPLE.

The Pope responded to objections such as, “It’s not easy, Father, to live in this world where there are so many temptations and we are lured by the attractions of a double life every single day!” For us it is impossible, he said, and only God can help us avoid such worldliness, which is why we pray in the Psalms, “The Lord, upholds me”. He is our support against that spirit which destroys our Christian identity.

That is why we pray with humility, saying “LORD, I AM A SINNER, ALL OF US ARE SINNERS, BUT I ASK YOU TO UPHOLD ME SO THAT I DON’T PRETEND TO BE A CHRISTIAN WHILE LIVING LIKE A PAGAN, WORLDLY PERSON.”

Pope Francis concluded by urging his listeners to pick up a bible and read the story of Eleazar in chapter six of the book of Maccabees. It will do you good, he said, and give you the courage to be an example to others. It will give you strength and support to uphold your Christian identity, without compromise and without leading a double life.

HOMILY FOR THE 3RD SUNDAY OF ADVENT YEAR A. 5 min read

HOMILY FOR THE 3RD SUNDAY OF ADVENT YEAR A.