On the Second Sunday of Lent, the Evangelist Luke emphasizes that Jesus went up on the mountain “to pray” (9: 28), together with the Apostles Peter, James and John, and it was “while he prayed” (9: 29) that the luminous mystery of his Transfiguration occurred.

Thus, for the three Apostles, going up the mountain meant being involved in the prayer of Jesus, who frequently withdrew in prayer especially at dawn and after sunset, and sometimes all night.  However, this was the only time, on the mountain, that he chose to reveal to his friends the inner light that filled him when he prayed: his face, we read in the Gospel, shone and his clothes were radiant with the splendour of the divine Person of the Incarnate Word (cf. Lk 9: 29).

There is another detail proper to St Luke’s narrative which deserves emphasis: the mention of the topic of Jesus’ conversation with Moses and Elijah, who appeared beside him when he was transfigured. As the Evangelist tells us, they “talked with him… and spoke of his departure” (in Greek, éxodos), “which he was to accomplish at Jerusalem” (9: 31).

Therefore, Jesus listens to the Law and the Prophets who spoke to him about his death and Resurrection. In his intimate dialogue with the Father, he did not depart from history, he did not flee the mission for which he came into the world, although he knew that to attain glory he would have to pass through the Cross.

On the contrary, Christ enters more deeply into this mission, adhering with all his being to the Father’s will; he shows us that true prayer consists precisely in uniting our will with that of God. For a Christian, therefore, to pray is not to evade reality and the responsibilities it brings but rather, to fully assume them, trusting in the faithful and inexhaustible love of the Lord.

For this reason, the verification of the Transfiguration is, paradoxically, the Agony in Gethsemane (cf. Lk 22: 39-46). With his impending Passion, Jesus was to feel mortal anguish and entrust himself to the divine will; his prayer at that moment would become a pledge of salvation for us all.

Indeed, Christ was to implore the Heavenly Father “to free him from death” and, as the author of the Letter to the Hebrews wrote: “he was heard for his godly fear” (5: 7). The Resurrection is proof that he was heard.

Dear brothers and sisters, prayer is not an accessory or “optional”, but a question of life or death. In fact, only those who pray, in other words, who entrust themselves to God with filial love, can enter eternal life, which is God himself.

During this Season of Lent, let us ask Mary, Mother of the Incarnate Word and Teacher of the spiritual life, to teach us to pray as her Son did so that our life may be transformed by the light of his presence. 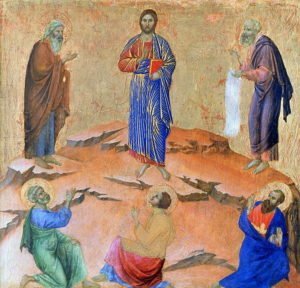 On this Second Sunday of Lent the Liturgy is dominated by the episode of the Transfiguration which in Luke’s Gospel immediately follows the Teacher’s invitation: “If any man would come after me, let him deny himself and take up his cross daily and follow me” (Lk 9: 23). This extraordinary event is an encouragement in the following of Christ.

Luke does not speak of the Transfiguration but describes what happens through two elements: the Face of Jesus which changes and his clothes that become a dazzling white in the presence of Moses and Elijah, a symbol of the Law and of the Prophets. The three disciples who witness the scene are heavy with sleep: this is the attitude of those who, although they have seen divine miracles, fail to understand. It is only the struggle against drowsiness that enables Peter, James and John to “see” Jesus in his glory. Then the rhythm quickens: while Moses and Elijah take their leave of the Master, Peter speaks and as he speaks a cloud envelops him and the other disciples in its shadow. This cloud, while it covers them, reveals the glory of God, just as happened for the pilgrim people in the desert. Their eyes can no longer see but their ears can hear the voice that comes out of the cloud: “This is my Son, my Chosen; listen to him!” (v. 35).

The disciples no longer have before them a transfigured face or dazzling garments or a cloud that reveals the divine presence. They have before them “Jesus… alone” (v. 36). Jesus is alone with his Father while he prays but at the same time, “Jesus… alone” is all that the disciples and the Church of every epoch have been granted; and this must suffice on the journey. The only voice to listen to, the only voice to follow is his, the voice of the One going up to Jerusalem who was one day to give his life to “change our lowly body to be like his glorious body” (Phil 3: 21).

“Master, it is well that we are here” (Lk 9: 33) are Peter’s ecstatic words, that often resemble our own desire before the Lord’s consolations. However the Transfiguration reminds us that the joys sown by God in life are not finishing lines; rather they are lights he gives us during our earthly pilgrimage in order that “Jesus alone” may be our Law and his word the criterion that directs our existence.

In this Lenten period I invite everyone to meditate assiduously on the Gospel. I also hope that in this Year for Priests Pastors may be “truly pervaded by the word of God… really know that word… to the point that it really leaves a mark on [their] lives and shapes [their] thinking” (cf. Homily, Chrism Mass, 9 April 2009). May the Virgin Mary help us to live intensely our moments of encounter with the Lord so that we may follow him joyfully every day. Let us turn our gaze to her, invoking her with the prayer of the Angelus.