In one of the comments written by a non-Catholic to one of my posts in a Christian group, I was advised to “STOP STRUGGLING” (commenting on the title of our FB page and weblog) for FAITH is the only necessary thing to be saved, basing himself on St. Paul, and “WORKS” are not necessary. He also told me to meditate on this: Sola fides…only faith in Jesus can save…

Well, obviously he is a non-Catholic and told him that I concur that faith in Jesus is necessary for salvation…but differing from his view and non-Catholic interpretation and hermeneutics, I answered that it has to be an OPERATIVE FAITH, A FAITH SHOWN IN WORKS (Had he only read the book of St. James…which I hope is included in his bible for Luther didn’t consider it canonical as it goes against his thesis of sola fides, aside from sola Scriptura, and had it removed from the original Catholic biblical canon from which our other Christian brothers derived their bible). Moreover, ST. PAUL HIMSELF HAD TO STRUGGLE IN ORDER TO DO GOD’S WILL!

In the 2nd reading of today’s solemnity when the entire Catholic Church celebrates Sts. Peter and Paul, I cannot help but meditate on it where St. Paul recounts how he “competed” and “finished the race,” i.e., the vocation he had received from Our Lord to preach to all the Gentiles, a task which he carried out with a passionate zeal to preach the Good news, after realizing that his life in and for Christ is all that really matters and everything else he considers as rubbish.

“I, Paul, am already being poured out like a libation, and the time of my departure is at hand. I have competed well; I have finished the race; I have kept the faith. From now on the crown of righteousness awaits me, which the Lord, the just judge, will award to me on that day, and not only to me, but to all who have longed for his appearance.

The Lord stood by me and gave me strength, so that through me the proclamation might be completed and all the Gentiles might hear it. And I was rescued from the lion’s mouth. The Lord will rescue me from every evil threat and will bring me safe to his heavenly Kingdom. To him be glory forever and ever. Amen.”(2 Tm 4:6–8, 17–18)

All these, St. Paul willingly fulfilled, without worrying about the tribulations, dangers, sufferings, apparent failures that may assail him coupled with the interior difficulties he had to confront, that “old man” who pulls him away from what he knew he had to do, that “law” in his members which alienates him from doing what he saw was right, from doing God’s will.

My point is: St. Paul had to struggle with all these! He knows that faith in Jesus Christ is what justifies us but he does not ignore the necessity of interior struggle in order to “complete the race” and receive the “crown of righteousness”.

Dear friends: Faith AND works! Not only faith (sola fides), but works as well = operative faith in order to be saved! St Paul himself taught us in his Hymn to Charity in the 1st Letter to the Corinthians of the different manifestations of love:

“Love is patient and kind, love is not jealous or boastful;  it is not arrogant or rude. Love does not insist on its own way; it is not irritable or resentful; it does not rejoice at wrong, but rejoices in the right. Love bears all things, believes all things, hopes all things, endures all things”(1Cor 13:4-7)

But in order for us to really believe and to really love, day in and day out, we have to struggle to correspond to God’s grace in order to overcome the old man, the law in our members which separates us from doing God’s will, our vocation to holiness and apostolate and to acquire the necessary virtues with God’s grace and this requires struggle on our part.

Let us meditate on the following words of St. Josemaria:

We cannot stay still. We must keep going ahead toward the goal st. Paul marks out: “It is not I who live, it is Christ that lives in me.” This is a high and very noble ambition, this identification with Christ, this holiness. But there is no other way if we are to be consistent with the divine life God has sown in our souls in baptism. To advance we must progress in holiness. Shying away from holiness implies refusing our Christian life its natural growth. The fire of God’s love needs to be fed. It must grow each day, gathering strength in our soul; and a fire is maintained by burning more things. If we don’t feed it, it may die.

Remember what St. Augustine said: “If you say ‘enough,’ you are lost. Go further, keep going. Don’t stay in the same place, don’t go back, don’t go off the road.” … Am I advancing in my faithfulness to christ, in my desire for holiness, in a generous apostolate in my daily life, in my ordinary work among my colleagues?

TOPIC 1: CAN YOU OVERCOME YOUR DIFFERENCES WITH OTHERS TO WORK WELL TOGETHER IN YOUR PARISH OR COMMUNITY?

Today is the Solemnity of Saints Peter and Paul. They are, arguably, the two greatest apostles of Christ. Peter was the first Pope and the rock on which Jesus built His Church. Paul wrote most of the New Testament, with 13 attributed to him, though most scholars agree only 7 are directly written by him. They both became saints but, at some point, they had major disagreements and confrontations.

TOPIC 2: What are some of the Protestant questions about the Pope?

But questions persist about the Papacy. Let’s answer some of them:
1. Where in the Bible does the word “Pope” shown?
2. Where does the Pope get his authority to be head of the Catholic Church?
3. Assuming the Pope has the authority, why would Peter be the first Pope?

Let us dwell on them all. I draw from the writings and vlogs of Paul Whitcomb and Bro. Casey Cole, OFM, and Fr. Mike Schmidts.

1. Where does the word Pope appear in the Bible?

2. Where does the Pope get his authority to be head of the Catholic Church?

The words “rock” and “shepherd” must apply to Peter as head apostle over the rest, or else, Jesus’ words will become so vague and, thus, meaningless.

The apostles did recognize him as the head apostle, given authority by Christ, everytime they met as a council. “In those days Peter stood up among the believers (together the crowd numbered about one hundred twenty persons)” (Acts 1:15).

Peter’s name was also the first name every time the gospel writers listed the names of the Apostles as you can see from this slide – in Matthew, Mark, Luke and the Acts.

3. Assuming the Pope has the authority, why would Peter be the first Pope?

All these prove that Peter is first in the long line of Popes, with Pope Francis as the 266th Pope. There were exceptional popes and sinful popes but that is a story for another day.

Share to help others in their Catholic faith and life.
Tags: June 29 reflection homily St. Peter and St. Paul 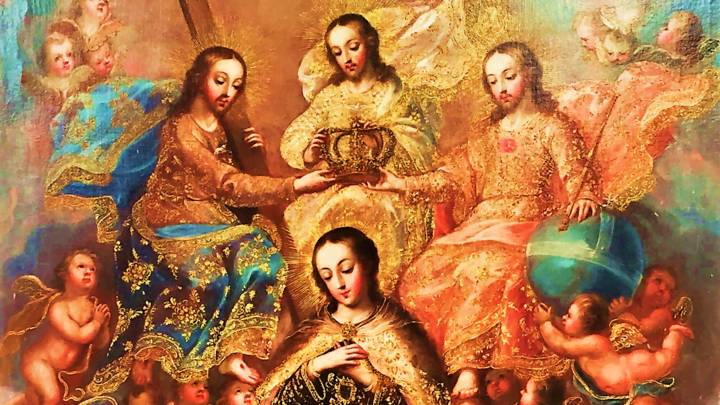 HOMILY FOR THE 6TH SUNDAY IN ORDINARY TIME YEAR A